Popular
Is Your Diet Harming Your Sperm? 6 Foods...
Top 3 Most Effective Weight Loss Strategies for...
Biomanix Review Ingredients Breakdown – #1 MALE PERFORMANCE...
How to Discuss Erectile Dysfunction with Your Partner
3 Ways You Can Maintain a Healthy, Well-Balanced...
The Case for CBD and its Potential Role...
6 Frequent Weight Lifting Injuries At The Gym...
Male Ultracore Review – The New King of...
5 Reasons Why Your Diet Makes You Fat
The Ultimate Guide to Eating Right for Senior...
Home » Top 15 Causes of Sexual Problem in Men
Health

Medical diagnosis is done by doctors to be able to determine which disease or condition can explain the symptoms their patient is experiencing. The patients are sometimes asked to undergo a physical exam wherein a professional examines the patient for possible medical signs or symptoms by inspecting, feeling, or listening to the body parts of their patient. Another diagnosis method is a laboratory analysis called blood test. It is done by extracting blood from the patient and afterward studying it on their lab to determine whether there are signs for any health conditions. The third diagnosis method is the urinalysis or urine test. Urinalysis is a portmanteau of the word urine and analysis and is used to detect underlying health conditions. Ultrasound is done in an office and is used for many reasons. It can detect if there are changes in the appearance of organs, tissues, and vessels. Sometimes a man’s sexual dysfunction is related to psychological causes, so they are asked to undergo a psychological exam.

The cause of men’s sexual related problems varies differently. It could be due to psychological, physical, neurological, or cardiovascular reasons. The treatment for sexual problems depends on the cause of their diagnosis. If the man is low on testosterone, then he will be given medication to increase them. Mild problems can be treated with antibiotics, ointments, oral pills, etc. Here are the top 15 causes of sexual problems in men.

A person with dementia suffers from the loss of memory, language, and thinking abilities. The most common cause of dementia is Alzheimer’s disease. Dementia is usually considered as three stages which are the early, middle, and late or mild, moderate, and severe. The medications for dementia may have side effects and it can cause changes in the person’s interest in sexual activities. The memory loss, deterioration of the brain, and depression can result in a person’s loss of interest in sex.

Men with multiple sclerosis usually suffer from erectile dysfunction. They may also experience other issues such as difficulty in achieving orgasm, ejaculation problems, and decreased sensation during sexual activity. Multiple sclerosis affects the brain and spinal cord.

The treatment for prostate cancer can have a decrease in the libido of the person. The side effects of the treatment from the surgery, radiation therapy, and other forms of treatment can result in loss of penis length, dry orgasm, low sperm counts, and loss of interest in sex. Men can return to their normal sex life after prostate cancer surgery. Some can recover fast while some take up to 24 months before finally being able to enjoy their sex lives again. 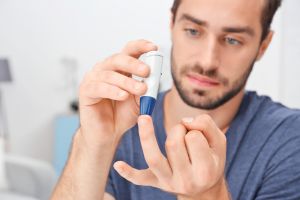 Since men with diabetes may have a decline in their testosterone level, they may have a reduced desire for sex and may also suffer from erectile dysfunction.

The hormone testosterone isn’t the only thing that fuels a man’s interest in sex and their performance. But, having low testosterone can affect a man’s ability to feel satisfied during sex, and men with low testosterone often have problems with their erection, also known as erectile dysfunction.

Men who take antidepressants may have a decreased libido and a problem with erection such as difficulty in getting it and maintaining it. They may also have a blocked or delayed orgasm.

Peyronie’s disease is a noncancerous condition and is not a threat. Men with this condition have curved penis and painful erections due to fibrous scar tissues that develop on the penis.

Stress can affect the production of testosterone and can even cause impotence and a decline in the libido.

An absence or reduce interest in sex is common in men with epilepsy.

Tumors can cause sexual dysfunction.

Pelvic trauma leads to sexual dysfunction such as erectile and ejaculation dysfunction. The sensory loss in the genital area and pain during sexual activity can be felt too.

Injuries to the spinal cord can result in a lost or reduced sensation and can also affect orgasm, erection, and ejaculation. 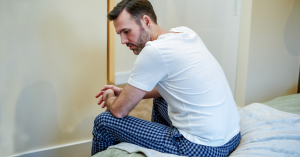 Depression affects the sex life of the person by delayed orgasm and premature orgasm.

Sexual problems in men can be prevented by choosing a healthy lifestyle and having sexual dysfunctions and health diseases treated. Exercising regularly can prevent sexual troubles as well as quitting smoking and drinking. Eating healthily can improve your health and prevent health conditions that may affect your sexual life. Always consult a doctor for any symptoms to prevent future diseases and illnesses.