Popular
Is Your Diet Harming Your Sperm? 6 Foods...
Top 3 Most Effective Weight Loss Strategies for...
Biomanix Review Ingredients Breakdown – #1 MALE PERFORMANCE...
How to Discuss Erectile Dysfunction with Your Partner
3 Ways You Can Maintain a Healthy, Well-Balanced...
The Case for CBD and its Potential Role...
6 Frequent Weight Lifting Injuries At The Gym...
Male Ultracore Review – The New King of...
5 Reasons Why Your Diet Makes You Fat
The Ultimate Guide to Eating Right for Senior...
Home » Sleep Apnea Is Not Just an Ordinary Sleep Disorder
Health

Sleep Apnea Is Not Just an Ordinary Sleep Disorder

Sleep apnea is a sleep disorder where your breathing is interrupted many times as you sleep. Your breathing suddenly stops for a few seconds before it starts again. This cycle continues for about a hundred times throughout the night, which impairs the quality of your sleep.

Some patients who have this disease stop breathing for about 10 seconds for as many as 30 times in an hour. This is a serious disorder that can lead to stroke, hypertension, heart disease, and potential death. Loud snoring is one noticeable symptom. If you’re a noisy sleeper, you may want to take a look at the potential dangers of sleep apnea and how to avoid the devastating consequences.

Sleep apnea is categorized into 3 types: obstructive, central, and complex. Each of these types is different on its own, though their symptoms can overlap. Let’s take a closer look at each:

This is the most common type which occurs when throat muscles that support the palate, the tonsils, the side walls of the throat, and the tongue relax while you sleep, blocking the airway and making you snore loudly. When this happens, the oxygen levels in your body go down, which prompts your brain to act fast and wake you from sleep, oftentimes, choking or gasping for air. Since this occurs too briefly, you can be unaware of what’s going on. Waking up too many times during the night can impair your body’s ability to repair and restore itself. 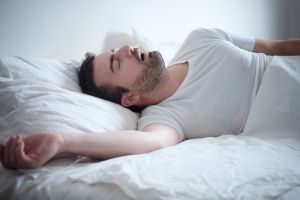 This type occurs when there’s poor communication between the brain and the muscles that control breathing. When your brain fails to send the proper signal to your breathing muscles, you stop breathing for a few seconds and may wake up with shortness of breathing. But this type is less common. Patients with this type seldom show loud snoring.

This type occurs when you have both obstructive and central sleep apnea.

Both obstructive and central sleep apnea can manifest almost the same symptoms. Consulting your doctor is the surest way to know what type you have if you possibly have it. The symptoms include loud snoring with pauses, gasping for air, dry mouth, headache, fatigue, daytime sleepiness, poor concentration, and irritability. Sleep apnea can be serious when you’re snoring loudly and abruptly stopping your breathing. However, not all who snores have sleep apnea and not all who have sleep apnea snores.

The symptoms of sleep apnea can also be mistaken for other problems. One case reports of a woman who suffered from depression. Despite the improvements in her depressive episodes, she still suffered from fatigue and lethargy. It was only when her psychiatrist advised her to see a sleep specialist that they discovered she had obstructive sleep apnea. In the sleep lab, they found out her breathing could stop for more than 10 seconds, for about 18 times an hour, after which she gasped for air.

If you have a partner in bed, they’d be the ones to tell you if they noticed some irregularities in your snoring and breathing. But if you sleep alone and find yourself tired the next day after a full night’s rest, you better not ignore these symptoms and check with your doctor right away.

Sleep apnea can affect both children and adults. But you’re more at risk when you have the following conditions:

Sleep apnea is more common in people who are obese. The higher the number of obese people, the higher the cases of sleep apnea. It’s because excess fats around the throat and tongue can block the airway and obstruct breathing.

Inheriting a narrow airway can potentially interrupt your breathing as your throat muscles relax during sleep.

Higher cases of sleep apnea are found in men.

You’re more at risk when someone in the family has sleep apnea.

Too much alcohol consumption has been linked to sleep apnea since alcohol relaxes the throat muscles.

Smoking can cause inflammation and fluid retention in the upper airway, which can worsen sleep apnea.

You’re likely to have obstructive sleep apnea when you find it difficult to breathe through your nose.

Gender and age can also be risk factors for sleep apnea. But the following serious medical conditions like heart problems, narcotic pain medications, and stroke can increase the risks.

Negative Effects of Sleep Apnea in Your Daily Functions

Sleep apnea is a disorder that should not be treated lightly. The more it’s ignored, the more serious the consequences it may bring. If you have it, it can affect your daily functions and may even result in injury or death. The complications of sleep apnea can include:

Because sleep apnea impairs your sleep, your body is unable to restore and heal itself during sleep, which makes you feel tired and fatigue all day.

Sleep apnea can affect your brain’s function and concentration. It can be dangerous for people who drive and can even be a cause for accidents on the road or in the workplace.

A lack of proper sleep results in moodiness and depression, which is likely to lead you to have relationship problems with the people around you.

Every time your breathing stops, the blood oxygen levels in your body drop, which increases your blood pressure and puts a strain on your heart. Having heart disease and sleep apnea can increase the risk of sudden death.

This disease can increase the risk of insulin resistance.

Sleep apnea can increase the risk of possible complications for patients who underwent surgery or general anesthesia due to breathing problems.

Though sleep apnea is a serious case, it’s still treatable. Your doctor can give you the right diagnosis and prescriptions. Lifestyle changes can also help ease the symptoms. If you’re obese, aim for weight loss. Stay away from bad habits that can worsen the symptoms, like smoking, alcohol, caffeine, and poor sleep. When you follow your doctor’s advice as well as a healthy lifestyle, you’ll be able to beat sleep apnea and stay as healthy as you wish you can be.

10 Ways to Stay Fit and Healthy at the Office

Should You Worry About an Enlarged Prostate?