Popular
Is Your Diet Harming Your Sperm? 6 Foods...
Top 3 Most Effective Weight Loss Strategies for...
Biomanix Review Ingredients Breakdown – #1 MALE PERFORMANCE...
How to Discuss Erectile Dysfunction with Your Partner
3 Ways You Can Maintain a Healthy, Well-Balanced...
The Case for CBD and its Potential Role...
6 Frequent Weight Lifting Injuries At The Gym...
Male Ultracore Review – The New King of...
5 Reasons Why Your Diet Makes You Fat
The Ultimate Guide to Eating Right for Senior...
Home » A Man’s Guide to Understanding Women in the Bedroom
Sex

Guys, women do not like constant banging and thrusting while having sex. Honestly, they’d rather have quick, amazing sex over a nagging thrust motion over and over and over again.

And, this constant banging or thrusting tends to leave us unenthused, unable to orgasm, and unlikely to want it again (unless we’re in a relationship and have to put up with your thrust sessions once in a while).

Quick, amazing sex is the way to go. Studies have proven that sex usually lasts approximately 6 minutes. Most couples don’t exceed 14 minutes. These numbers are only in relation to sex, they have nothing to do with the foreplay beforehand.

But, that doesn’t mean that women wouldn’t enjoy lasting a few extra minutes during sex. So, how do you get yourself, and your lady, to last a little bit longer so that the two of you can enjoy yourselves? More specifically, how do you get her to enjoy herself entirely?

Women typically want either the short sex or the lovemaking sex. But, as previously stated, they do not want all of that banging and thrusting.

So, if you’re lady enjoys longer sex, try actually practicing sex. It’s kind of similar to body builders and people who work out daily; They visit the gym to get stronger, because duh, that’s their goal. So, if your lady wants to have longer sex, the answer is to have more sex.

Use Some Toys Fellas

Fool around with a few toys. Now this can go either way, guys. Fooling around with a toy while having sex will definitely make her orgasm quicker; So, if she wants to have quick, amazing sex, this is the way to go. However, fooling around with a toy before having sex, as an act of foreplay, can get her going but may not get her to the brink of orgasm. This is good, though. Doing this will excite her a little bit more, and will allow for her orgasm to initiate great amounts of pleasure within her while also making the sexual experience last longer.

Foreplay will get the two of you feeling waves of pleasure. Yes, it may ensure that the two of you orgasm quicker, but it still allows the sex session to last a little longer.

I know it was mentioned before, but here I’ll go into a little more detail.

Refractory Time May Help Out 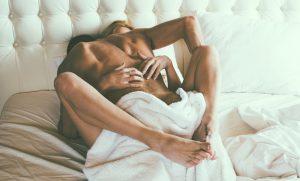 Typically, men ejaculate within the first five minutes of sex, sometimes even less. This leaves women feeling disappointed and frustrated. But, don’t back down, guys. Give yourselves a breather and go back at it again in a few minutes.

Waiting a little while and then getting back into the rhythm of sex is also known as a man’s refractory period. Continuing sex during this period ensures that the penis is less sensitive, and is able to last longer until the woman is ready to orgasm.

Keep in mind, this little trick isn’t for everybody. Some men may have difficulty doing this, so don’t get disappointed when you can’t provide a second time for your lady.

Don’t be Afraid to Try Something New

This little trick can help those of you men that have been in a relationship for quite some time.

Let me explain a little bit more in depth. When you’re with a woman for so long, you tend to adopt favorites when it comes to sex positions. The cowgirl may make you orgasm quicker, or maybe the reverse cowgirl does it for you better. But, whatever position you fancy the most is the position that will make you orgasm the quickest.

Change it up if you want to avoid ejaculating so fast. The more awkward and unfamiliar the new position or fantasy is, the longer you will last. Try it out, but be sure to keep up the same pace and motions while in the position so she can orgasm and you can follow right behind her.

The Ultimate Guide to Prostate Cancer