Popular
Is Your Diet Harming Your Sperm? 6 Foods...
Top 3 Most Effective Weight Loss Strategies for...
Biomanix Review Ingredients Breakdown – #1 MALE PERFORMANCE...
How to Discuss Erectile Dysfunction with Your Partner
3 Ways You Can Maintain a Healthy, Well-Balanced...
The Case for CBD and its Potential Role...
6 Frequent Weight Lifting Injuries At The Gym...
Male Ultracore Review – The New King of...
5 Reasons Why Your Diet Makes You Fat
The Ultimate Guide to Eating Right for Senior...
Home » Go For It With That Gym Hottie
Sex

Go For It With That Gym Hottie

Have you ever seen a hottie at the gym? Had her distract you from what you’re doing — ended up becoming the subject of your fantasies? Of course you have. We’ve all thought about it and had a gym crush or two (or five). It’s one of the reasons to go to the gym, even if we don’t care to admit it. Well, guess what? The data actually supports going for it with your gym crush. I’m not sure you should be going to to the gym to just treat it as a meat market — hoping to bed some gym bunnies. Or treat it like a singles club, going with the intent of meeting a potential partner. There are better places for that kind of thing. However, keeping yourself open to new experiences and new people — there’s nothing wrong with that at all. If you’ve thought about hitting on that woman on the elliptical between sets — trust me, you’re not alone. But there are some tips to follow to turn that gym crush into something more — a date, a hook up, a serious relationship, or maybe just a gym/workout buddy.

The first and main tip is to not be a creep. That should be the first tip of basically any dating article and it might seem like something that goes without saying but it’s good advice and you’ll get a lot further by avoiding it. 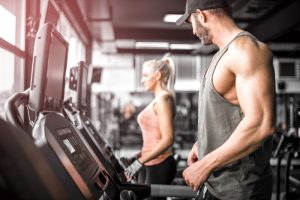 Don’t linger or stare. You might think you’re being complimentary, but it could — instead — be taken the wrong way. They could be in the zone, focused on beating a personal best and you could totally suck them right out of that. You could also end up making them feel self-conscious, throwing off their form and — potentially — leading to injury. You don’t want to make them tense because that could end the same way.

Feel free to praise someone for a solid workout, or reaching a personal best, but keep it clean and wait until they get there. Keep the praise workout related though, and, unless you’re flirting has headed that way, you don’t need to be bringing up the effects of the workout on her booty or breasts or anything like that. That’s veering into creeper territory. Respect her workout regimen. And respect her.

A great way to show interest — and to show off your generosity and great personality — is to do a little act of kindness. Did you notice that someone who used a machine she’s about to use didn’t wipe it down when they were done? Grab a towel and wipe it down for her before she goes for a ride in someone else’s sweat. Notice that she’s getting a little low in her water bottle when you need a refill too? Ask her if she needs a refill on the way to the fountain for your own. She’ll be appreciative, take notice of you and maybe return the favor int he future. If she does, that’s a good sign that your gym crush could turn into something more.

There are some potential negatives with pursuing a gym crush. You don’t want to end up with a bad reputation at your gym and being thought of as a creep. The rumor mill at the gym can quickly get swirling and you want no part of that. If you go about it the right way though, and take the advice above to heart, then who can blame you for approaching your crush and giving it a genuine shot. And if it doesn’t go well, you can always time shift a little to avoid them for a while until the negative memories and feelings subside. And if it goes particularly poorly — there are plenty of gyms out there that would love to have you. (And I’m sure they’re also filled with hotties for you to crush on anyway). 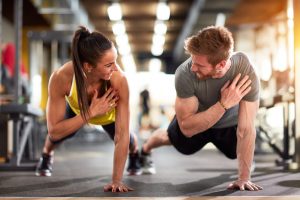 Something great about turning a gym crush into something more is that you may get a workout buddy out of it. If she’s your gym crush, that means the two of you already have at least somewhat similar workout regimens and patterns. Having a workout buddy — empirical data shows — makes you more likely to stick to a workout regimen because you’re beholden to someone other than yourself. It’s really easy to talk yourself out of a workout. It’s a lot harder when you feel like you might be letting someone else down — especially someone who you have a crush on and want to make sure has positive thoughts about you. Furthermore, when you have a workout partner, you’re more likely to associate positive thoughts and feelings with the act of working out. And if that workout partner happens to also be their significant other, the data also supports that the two of you will be happier and more energetic, generally. There’s also a positive correlation with the two of you having a better sex life. That might be worth it for the price of that gym membership all by itself.

The thing that should give you the self-confidence you need to pursue something with your gym crush? The data supports that 97% of those who did end up approaching that attractive hottie and the gym and pursuing something more with their gym crush ended up at least going on a date with them. For some it ended there, but a majority of those people ended up at least having a hook up or a gym partner come out of the situation. And as many as a third saw it become an actual relationship. So, give it a shot. You have so little to lose, and the benefits outweigh any negatives.