5 Ways Your Woman’s Secretly Controlling You

Controlling me? Nah, that’s not happening.

Uh, yeah it is. She’s got ninja controlling moves that you don’t even see. You’re blind to it and she knows it.

Now, this article isn’t going to bash women, by any means, but just give you insight into some of their moves. You and her communicate differently, but why is that?

Here’s one reason most women’s communication can be so beat-around-the-bush-y, i.e. hard for you to understand.

Unlike most of your life, women have been oppressed. Whether it was in marriages where they were treated as property, the times before suffrage where they couldn’t vote and had to ask their husbands to do anything, or right now with the wage gap and health care legislation. This oppression forced them to think of other ways to get what they want. They learned the art of subtlety, whereas you didn’t have to.

Subtlety is a powerful tool to convince you to do something you knew a second ago you didn’t want to do. And make you think you always wanted to do it. Yes, that’s some tricky logic, right there.

All right, now that one of their possible reasons has been explained, let’s get to the five ways you’re being controlled. If you’re surprised that’s not surprising. 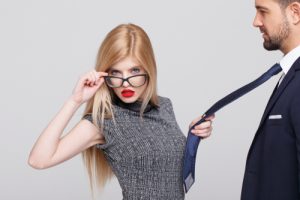 When women want something, most wont ask you, right out. They’ll hint at it, leave somewhat cryptic notes, or throw another couple in your face. If your lady mentions anything about another couple, listen. She’s telling you what she wants. If greatest-husband-since-marriage-was-invented took his wife to the spa, an expensive dinner, and rubbed her feet for her birthday, is mentioned, your lady would like the same. If she’s talking about that cute baby down the street a lot of the time, there’s a hint. This behavior can get on your nerves and make you feel desperate to please. You love this woman, but why the heck won’t she just ask? Dude, it’s complicated, but know that she’s running things and leaving you to clean up the skid marks.

It’s confusing when your strong, independent, doesn’t-need-you, woman morphs into a pile of helplessness. What happened? Is she sick? How can you help her? Will her favorite [insert item] make her feel better? Did she break her titanium backbone? This move is used to get you to do something she doesn’t want to do or lure you into doing something she knows you don’t want to do. The damsel role taps into your need to protect her. When she’s looking all wide-eyed and fragile, you’ll do anything she wants. You know it’s true.

The truth is, women have a lot of pressure to be strong, just like you. Yeah, they can cry for about 10 minutes and not be labeled a weak-nerved drama queen, but they can’t get angry. It’s not ladylike or whatever. This doesn’t help lessen their subtle communication style or your near constant confusion.

If a woman’s done something totally messed up, she may burst out in tears. Not real tears, but passive-aggressive tears so you’ll let her off the hook. A crying woman is a stereotype, but it’s also a tried-and-true method to control you, the relationship, and come out looking like the blameless victim. You’ll feel like crap and obsessively ask yourself what you did wrong. 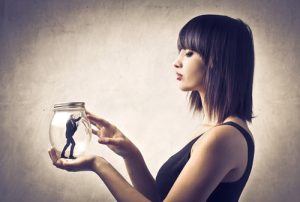 You wanna know why you have, and need, a man cave? Because your lady owns all the rest of the house. She’ll sacrifice a garage or basement to get you out of the way. Make you think it’s your sanctuary. Make you love it. But, really, she’s drawn a circle around your man cave and coaxed you into staying in that circle. Most women like things, especially their house, a certain way. They can control this small space. They can’t control you. Solution? Get rid of you.

So, enjoy that man cave with the 60-inch plasma TV, comfy gaming chair, beer-stocked cooler, and invisible lock on the door. She’s loving you being there. With you gone, she doesn’t have to worry about falling in the toilet, pee on the floor, and sports blaring from every TV. Everybody wins. Those may have been the exact words she used.

For all the differences between you and your lady, sometimes it feels like she can read your mind. When your birthday rolls around, she might have the exact gift you want. Without you even saying it, she’s cooked your favorite meal, did that thing you like in the bedroom, and complimented your driving skills three times in one day. Of course, most of this is because she loves you, but some of it is to butter you up. By doing what you like, she’s making sure you stay in touch with exactly what she wants. Exactly what she wants. Get it wrong and she’ll be pissed. Why? Because she spent time strategically getting it right for you. Usually, getting it right is easier for women than you, though, because she’s more observant.

The next time you get the exact gift, or compliment, you want, remember that she’ll expect you to know what she wants in return. Exactly what she wants. Even though she might not tell you in a way you can understand.

Not all women are controlling you, but most women communicate in a more subtle way than you.

Relationships are a push and pull between two people who both need stuff. She controls through subtlety and you control the relationship in a different, more heavy-handed way. With your woman, try to open the communication up more, make her feel comfortable asking for stuff right out. But, always keep in mind these five moves.

And all of the others that many women use.

Does Music Have Anything to Do with Your Sex Life?

7 Foods That Can Boost Your Immune System

Sleep Apnea Is Not Just an Ordinary Sleep...