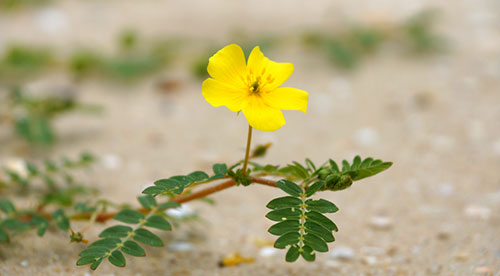 Table of Contents show
1 Hypogonadism in Men
2 Of Mice and Men
3 Cited Sources:

Tribulus Terrestris is more commonly known as Bullhead or Puncture Vine and is an invasive perennial species of North America. This herb is native to the subtropics of mountainous areas such as Africa, southern Europe, eastern, and western regions of Asia. It is a flowering plant that bears fruit which is widely used in both body building and male enhancement supplements. It has long been used in Indian systems of medicine including the Ayurveda practice for the same purposes.
It is believed to promote positive sexual health and function in part by assisting in the rebuilding of tissue, especially of the reproductive system. It also stimulates androgen receptors of the brain making them more sensitive to testoid which is a steroidal hormone responsible for the development of many male characteristics. This in turn raises testosterone levels and increases the libido.

One of the most commonly known causes of erectile dysfunction in men is hypogonadism. Hypogonadism is a declination of testosterone levels; however, these declining levels are not always the cause of ED. Men whose testosterone levels decline due to having vasectomies performed present with positive results when treated with some sort of exogenous androgens. In other words, treatment with Tribulus Terrestris can encourage normal sexual function to return because it increase androgen levels.

Of Mice and Men

A scientific study published by the U.S. National Library of Medicine National Institutes of Health demonstrates the effects of Tribulus Terrestris on androgen levels. This study revealed that the properties of this herb increased both intracavernous pressure and sexual behavior in rats. Scientists believe this is due to the ability of Tribulus Terrestris to raise androgen levels and the sensitivity of androgen receptors within the brain. Androgens, in turn, are known to increase NADPH-d and AR. This provides scientific validation for the claims that Tribulus Terrestris acts as an aphrodisiac. This androgen increase was also presented by several other species in additional studies published on Pub Med by the U.S. National Library of Medicine Institutes of Health.
Tribulus Terrestris supplements are often recommended for several sexual dysfunctions including erectile dysfunction, premature ejaculation, and spermatorrhea. This latter condition is much like premature ejaculation except that it is not accompanied by an actual orgasm. Although there will be numerous additional studies, those performed to this point have already validated that which Asian cultures have known for centuries.